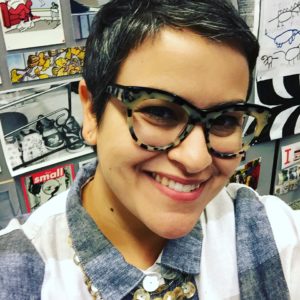 Who is Nedda?
Nedda is the librarian for the College of the Arts and Department of Communication. She has the unique pleasure of working both with “creatives”–filmmakers, designers, artists, musicians, actors, etc.—and with scholars who study, analyze, and write about the arts. Nedda feels that she has a pretty cool job! And she especially loves teaching students in the creative fields how to use research to enhance their own practice, whether it’s painting or playing the tuba.

Nedda’s Educational Background:
Nedda was an art student as an undergrad. This early training taught her how critical the relationship is between research and creative practice. After college, Nedda moved to New York City and went to cooking school! She worked as a chef for about three years, but got bored. Nedda finally decided to get a Master’s degree in Library Science when she saw a job ad placed by an archaeological expedition that was looking for a librarian to go to Egypt and catalog objects discovered on a dig. She thought it sounded like an amazing career with a lot of potential for intellectual stimulation. Although she hasn’t ever been employed as part of an archaeological expedition, she is happy to report that her initial impressions of librarianship have been spot on. As a librarian, Nedda learns something new every day.

Quick Facts about Nedda:
• Favorite subject in school: Art! But she also really loved Latin, and has found one phrase in particular to be useful in her line of work: De gustibus non est disputandum. If you don’t know what that means, look it up! (or ask a librarian)
• What Nedda Wanted to be When She Grew Up: nothing boring. That was pretty much her only criterion.
• What Does Nedda Still Want to Learn: She’d really love to learn Arabic. Her father was from Iraq, but she and her brother never learned the language—she thinks her parents found it too convenient around holidays and birthdays to have their own “secret code!”
• Standard Coffee Order: Hazelnut Soy Latte, iced if it’s over 70 degrees outside. Because she’s fancy.