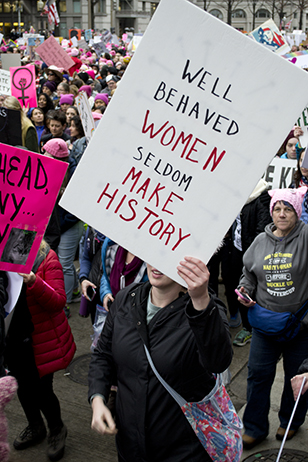 On January 21, 2017, the Women’s March on Washington took place in the nation’s capital, and sister marches were held across the nation and worldwide. A concerted effort is underway to document the marches in every state, and Georgia State University’s Special Collections is committed to collecting materials from the Atlanta March for Social Justice and Women, the Women’s March on Washington, and any other march that Georgians attended.  Already, more than 20 people have volunteered to conduct oral history interviews with marchers, and individuals have begun donating their photographs, audio and video files, ephemera and records. Research Guides are now available to inform the public and potential donors about the collections:

The oral histories, photographs, audio and video can be accessed via the Women’s Marches 2017 Collection in the GSU Library’s Digital Collections.  Digital content will also be shared with the national Women’s March on Washington Archives Project, which is the brainchild of the Women Archivists Section of the Society of American Archivists.

If you or someone you know would like to be interviewed or make a donation, please contact the Women and Gender Collections archivist, Morna Gerrard ((404) 413-2888 / mgerrard@gsu.edu) or simply read the instructions on the Research Guides, complete the donation form, and make your donation.