Why is Shakespeare Still Relevant? 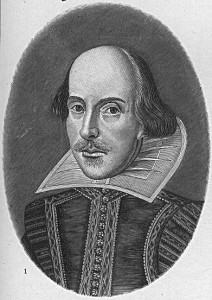 Saturday, April 23rd, 2016 marks the 400th anniversary of William Shakespeare’s death.  Born in Stratford upon Avon to John Shakespeare, an alderman and glove maker, and Mary Arden Shakespeare, William Shakespeare was baptized on April 26, 1564.  There is no official record for the date of his birth, but it is likely that he was born only a few days before his baptism.

Shakespeare has been variously called The Bard, The National Poet of England, and The Greatest Playwright of the English Language.  The publication of the first folio, Mr. William Shakespeare’s Comedies, Histories, and Tragedies, in 1623, ensured wider access to his plays as texts, performances outside of London (reaching a wider audience), and burgeoning scholarship.  More than 400 years later, his plays are still performed somewhere in the world nearly every day and have been adapted for film, ballet, opera, musical theater, and novels.  Additionally, he is credited with coining several thousand words still in use today.

When I asked my 14 year old daughter, a budding thespian, why she thought Shakespeare was still relevant she said, “His plays were for the people.  They focus on emotions and situations that regular people would have recognized.  Once you get used to the language, you see that that is still true.”  Emotions and situations such as family conflict, ambition, jealousy, misunderstanding, love, and romance; Shakespeare touched on all of these.

Books on Shakespeare and His Works by GSU Faculty:

To Find Works by and about Shakespeare:

Search the library catalog for:

Search the library catalog for:

This entry was posted in English, For Faculty, For Graduate Students, For Students, Uncategorized and tagged Shakespeare, William. Bookmark the permalink.