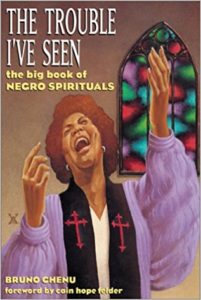 As someone of color born and raised in the south, my introduction to Negro spirituals came very early. These were the songs that were sung in church by the Mother Board and Deacons. Or as I used to call them, the old-timey songs I dislike that they sing without music and seem so sad. As a youngster, I didn’t know of the significance these songs played in the lives of slaves. I knew they seem important to my grandmother, great-grandmother and other elderly members of the church, but they were old. So, what did they know?

As I got older, I slowly learned of the cultural significance and relevance of those just a generation out of slavery. Guenther says the “creators of Negro Spirituals were fiercely determined survivors of the largest forced migration in history [slavery]….The enslaved peoples’ frustration and anger at the oppression, torture, and control of body, mind, and soul are reflected in their Spirituals” (65-66). According to Sturgis, “Old Negro spirituals, the raw, fervent plantation songs that helped African Americans through slavery, Emancipation and Jim Crow are finding a rebirth in the era of hip-hop”(20). Sturgis further explains that Negro spirituals were almost extinct after slavery as former slaves no longer wanted to be reminded of their slavery past. But, thanks to the Fisk Jubilee Singers of Fisk University who in 1867 found that they could raise more money for the school by singing spirituals than any other form of music, spirituals were revived for future generations(21). Even today, many of the choirs at historical black colleges and universities perform Negro spirituals.

Our library has a rich collection of sources on the history of spirituals with lyrics and scores. Here are a few examples.