Sacrifice – The Rosses in the South

The M. H. Ross Papers digital collection is now publicly accessible online. Digitization of the M. H. Ross Papers is being funded by a $48,865 grant from the National Historical Publications and Records Commission and will continue through September 2018.

By early 1941, Mike Ross was working as a Field Representative for the United Mine Workers of America (UMWA), which was still part of the Congress of Industrial Organizations (CIO) at the time. Mike’s official duties involved a tremendous amount of responsibilities, including helping workers gain signatures to get elections and unionize, bargaining with companies, handling grievances, and even designing and mimeographing all leaflets on his own. Constantly on the move from one plant to another, from state to state, Mike worked at a feverish pace and faced significant harassment and even danger. 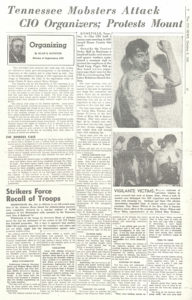 On the night of September 26, 1941, Homer Wilson and Oscar Wiles, representatives for Mine, Mill & Smelter Workers (MMSW) and UMWA were driving out of Harriman, Tennessee after a large pre-election meeting when their car was ambushed. Kidnapped at gunpoint, the men were driven into the woods where they were stripped, tied to trees, and then savagely beaten before hot tar was poured over their bodies. After they were released without their clothing into the cold night, the two men walked five miles to a farm for help.

As news of this violence spread, CIO headquarters in Knoxville asked if anyone would volunteer to resume the work in Roane County, Tennessee, Mike Ross was one of two men to immediately raise his hand.

Ross left Saltville, Virginia, where he had been organizing the Mathieson Alkali Works, and began work on elections in Rockwood, Tennessee. Under the cover of darkness, he would enter Roane County surrounded by cars full of armed laborers for protection. Everyone would meet in a small, darkened worker’s house, sometimes fitting 40-60 people in one room, and they would play music, give speeches, and organize. Under these conditions, this underground movement prepared for an election. In January of 1942, Roane County Smelter Workers Union 579 won a labor board election by a vote of 323-1. The following April in Rockwood, Tennessee, over 500 people participated in a victory parade hosted by the CIO. 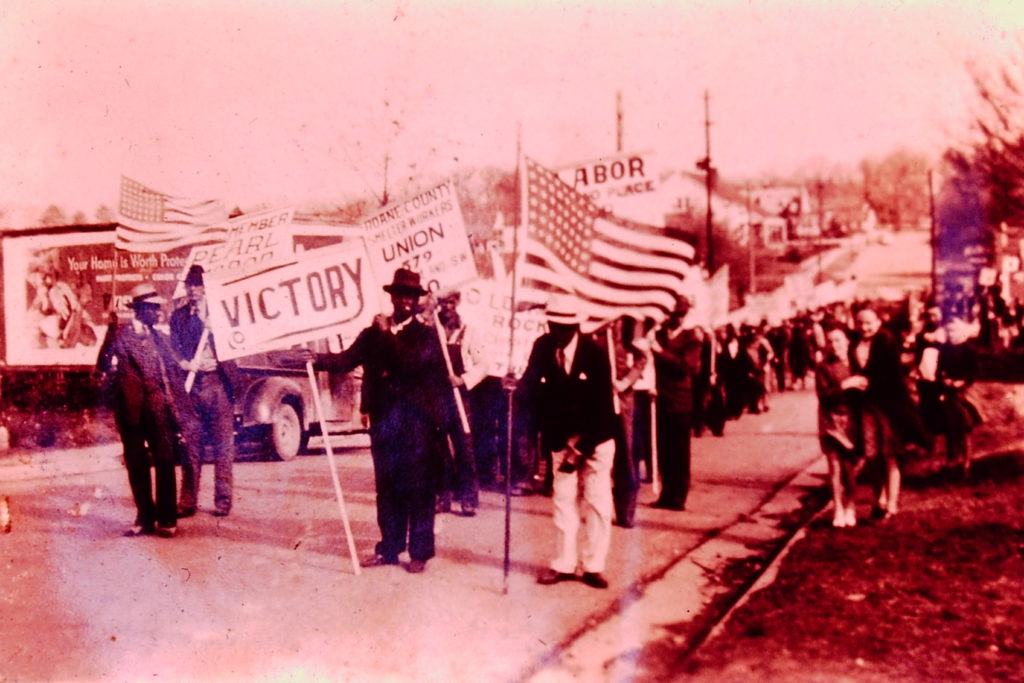 February of 1942 found Mike in Spartanburg, South Carolina for a meeting with workers of the Taylor-Colquitt Wood Preserving Company. After the meeting, Mike and others with him were followed and harassed by some of the plant supervisors and the wife of the superintendent of the company. Worried about his safety, he first called the police and then drove to the jail asking for an escort out of town but the police declined. For five hours, Mike sat in the police station while a mob of around 75 people formed outside. Inside, he was abused and his life was threatened by the superintendent’s wife and her companions and the police not only allowed this to continue, but also one officer informed Ross that some labor organizers in town had either died suddenly or had disappeared. After this grueling ordeal, Mike was finally escorted out of town unharmed.

Mike Ross spent a majority of time for the remainder of 1942 in Bessemer and Birmingham, Alabama, where he helped unionize locals, worked on war-time resolutions for workers, and also administrated an educational program. Over 200 members of 18 locals and auxiliaries registered for union classes in Bessemer, AL, many of whom could not read or write but still came out to learn many of the same topics that Mike himself learned at the Southern Summer School for Workers. 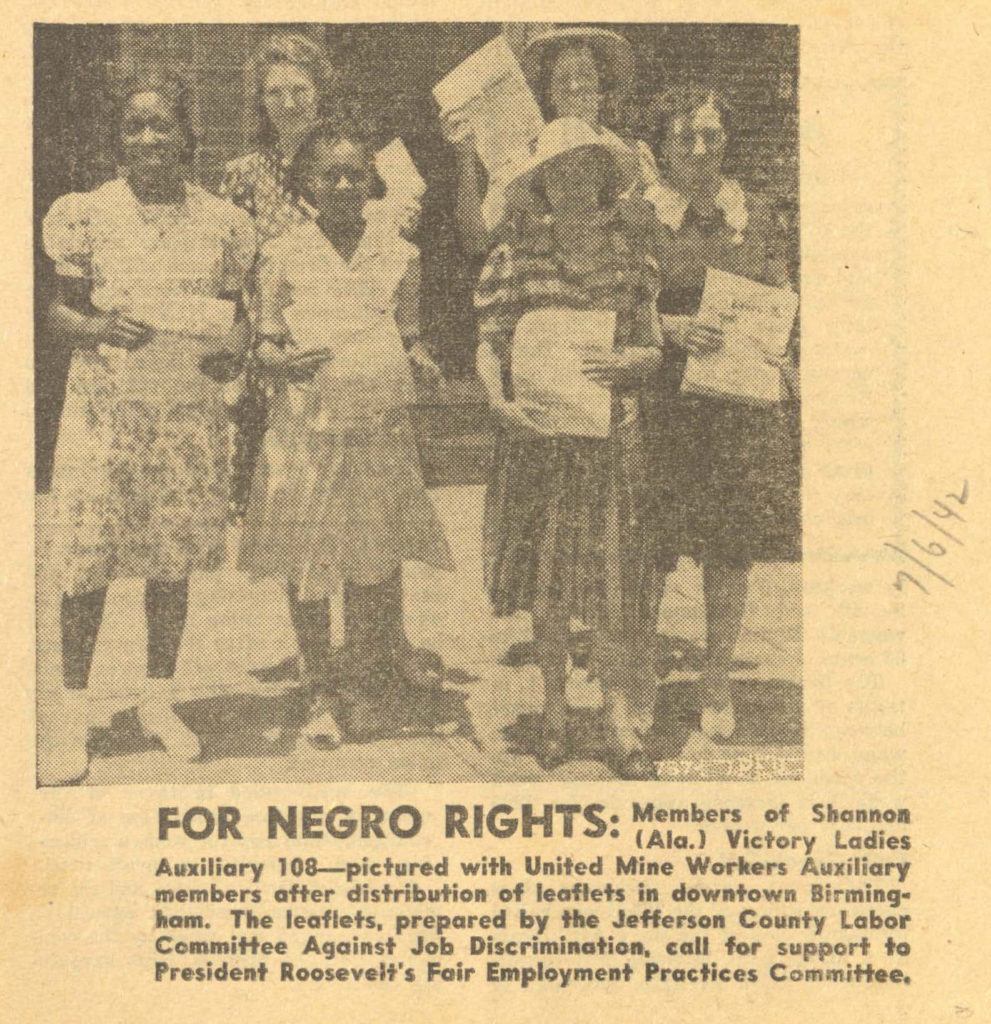 By his side through everything was his wife Buddie who, herself, was quite active. She organized ladies’ auxiliaries to pass out flyers welcoming Roosevelt’s Fair Employment Practices Committee (FEPC) hearings in Birmingham and she also canvassed for election votes, sometimes going so far as to pose as an employee to gain access to workers on business property. [L2001-05_012_17 11]

Despite the progress made in Alabama, Ross and other organizers faced frequent attacks from white supremacists and other anti-union forces. After one particular episode in which his home was ransacked and his life threatened, Ross and a then-pregnant Buddie left Alabama to Tennessee for the birth of their first child. From 1943-1945, Mike served as a rifleman in World War II on the European front, where he received disabling injuries for which he was honorably discharged. Not long after returning to the US, he resumed his labor activities.

In 1946, Mike Ross and an African American union representative named Frank Allen moved to Macon, Georgia as a part of Operation Dixie, which was aimed at unionizing anti-labor strongholds in the South, especially within textile manufacturing. All-white primaries had just been federally overturned in Georgia and, while African Americans were registering to vote in masses, the Ku Klux Klan and other white supremacists responded with ferocity and terror. 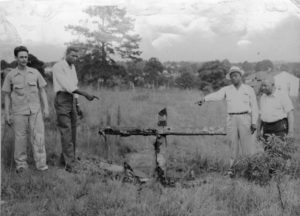 Mike Ross (left), pictured with three African American men with a burned cross which had been set on fire in a black residential neighborhood in an effort to stop unions, 1940s [L2001-05_001]

Mike, Buddie, and their three year-old daughter moved first into a motel room and then rented a small shack while staying in town. An outspoken activist for Civil rights, Mike experienced trouble from the beginning in Macon and, though he was very successful in organizing several small plants, he and his family paid a very dear price.

After moving to the shack, the family’s landlord warned them that the KKK was out to kill Mike and gave Buddie instructions on how to escape with their daughter when—not if—the KKK arrived to lynch him. The fear of violence was so great that friends would often camp out at the home, armed with guns just in case.

In August of 1946, while the Ross family was out of town, their home was ransacked and a threatening letter was left behind. Immediately following this ordeal, the editor of the Macon Telegraph Buford Boone published an inflammatory piece on Mike, questioning the veracity of the attack on the Ross home and Mike’s integrity in general and insinuating that Mike was a Communist, publishing personal details such as work history and family relationships to back up his claims. Mike threatened legal action for libel, but a tragic attack on the family was quickly to follow.

One evening, while waiting for her husband to return from work, a pregnant Buddie opened the door to find 25 fully-robed klansmen intent on lynching her husband. After threatening her in search of her husband’s whereabouts, they left. Unaware of the danger at home, Mike had taken an alternate route that night and returned to find his wife and young child in hysterics. While hospitalized, Buddie suffered a miscarriage.

The Rosses did not stay much longer in Macon, but Mike and Buddie continued to work tirelessly in organizing unions all across the country for many more years. In the decades to come, Mike would diversify his skills time and again, showing that his moral commitment to the working class of America truly had no bounds.

To learn more about just some of Mike’s many activities in the South in the 1940s, explore these related folders:

Mine, Mill, and Smelter Workers, Southern Conference on Human Welfare), Tennessee and Alabama, 1942-1943

Newsclippings, papers, and correspondence – organizing in the south, MMSW and the NLRB, [folder 1 of 2], 1946

Newsclippings, papers, and correspondence – organizing in the South, MMSW and the NLRB, [folder 2 of 2], 1946