We often hear the phrases “living through history,” “witnessing history,” “history in the making.” We are literally always creating what historians call “primary sources,” which can be any kind of resource that is made, written, drawn, filmed, built. Almost anything that is created can be interpreted as a primary source. Historians then use primary sources to create what are called “secondary sources,” which are scholarly books and articles that interpret primary sources, usually in the context of other secondary sources which provide background information and context. Because scholarly books and articles rely on the careful gathering and interpreting of primary sources, and usually involve some sort of peer review (“peer review” means that other scholars read a draft of the book or article to determine the soundness of its argument), scholarly treatments of particular events often take awhile to make their way into print.

In today’s media culture, however, there is no shortage of primary sources generated around a particular event as it unfolds. In late summer and autumn of 2014, after the shooting of Michael Brown in Ferguson, Missouri, newspaper accounts and editorials abounded; Twitter, Vine, and other social media platforms also provided a wealth of real-time primary source materials. Washington University’s library created Documenting Ferguson, an online collection of the digital media captured by members of the Ferguson community after the August 9, 2014 shooting.

However, very little scholarship existed at that time on race relations in Ferguson or North St. Louis County. Immediately after the shooting, we posted several sources on this blog intended to help contextualize the history of race relations in St. Louis and St. Louis County, including one book, Daniel J. Monti Jr.’s Semblance of Justice: St. Louis School Desegregation and Order in Urban America (1985), which happened to be a case study of the Ferguson-Florissant School District’s mandatory desegregation, which took place in 1976, but which at the time was not even cataloged as being about the town of Ferguson, Missouri.

We have also seen the rise of blogging and other forms of writing, which can be treated as primary sources. But many scholars have also turned to blogging and social media platforms to use their expertise to interpret current events as they unfold. The Black Lives Matter movement, sparked by the acquittal of George Zimmerman in the shooting death of Trayvon Martin, an African-American teenage boy, came to national attention kindled by the deaths of Michael Brown and Eric Garner by police actions in Ferguson and New York City respectively.

At the same time, using hashtags on Twitter and other social media, scholars specializing in African-American Studies worked together to create various “syllabi” focusing on and contextualizing racially charged moments in recent American history. These syllabi often look like your own course syllabi: they are lists of books, articles, and other media sources designed to educate students and general readers about the context, history, and broader significance of challenging events, particularly those affecting groups whose history has been underrepresented or marginalized. 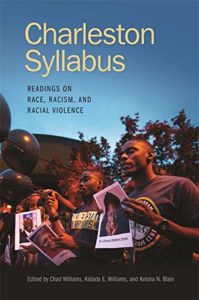 These syllabi use social media to collect and disseminate expertise and information about difficult topics, while also highlighting the communities involved: the communities experiencing these events directly, the communities of educators assembling educational materials, and the broader communities of people in need of this information. These “syllabi” also highlight that the events they are teaching about are in themselves historical: they are history being made. At the same time, they represent positive action on the part of those assembling the syllabi and those using them to enhance their learning.

By 2014, scholarly works on Trayvon Martin had begun to appear, including:

New subject terms evolve in response to developing events. “Martin, Trayvon, 1995-2012” is now a Library of Congress subject heading. Prior to August 2014, “Ferguson (Mo.)” was also a Library of Congress subject term, but searching on it would yield few results. Searching the library catalog for “Ferguson Missouri” as a subject now yields more results related directly to the unrest there. This search: 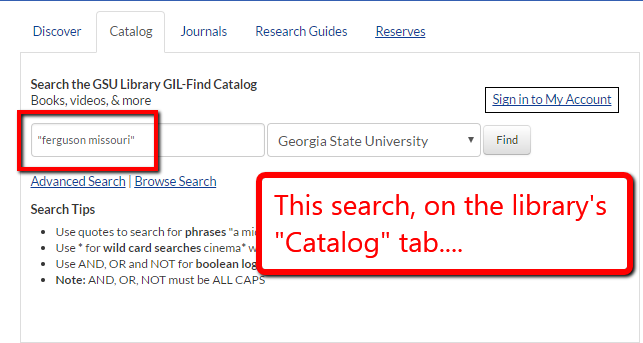 now leads to these results, as a starting point:

And “Black Lives Matter movement” is now also a Library of Congress subject term in its own right.

At the same time, primary sources continue to be generated that will contribute to historians’ (and our) understanding of current events. Examples of print sources that can be read as primary sources about Black Lives Matter might include: