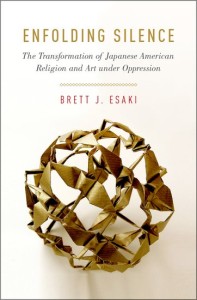 . Brett Esaki of the Department of Religious Studies on the  publication of his book: Enfolding Silence: The Transformation of Japanese American Religion and Art under Oppression (Oxford University Press).

Japanese Americans have developed complex silences in response to social and religious marginalization. Utilizing histories and ethnographies of Japanese American arts-gardening, origami, jazz, and monuments—Enfolding Silence uncovers silences that are mixtures of silences from religion, art, and oppression. To explain this, a theory of “non-binary silence” articulates how multidimensional silences form and function. Japanese American non-binary silences have been enfolded through a strategy of survival called gaimenteki doka (outward assimilation), in which an external silence of hiding in plain sight from oppression preserves internal silences of religion, history, and culture, and in the process merges them. Silences also embody the transformation of Japanese Americans as they integrated with White Americans, African Americans, and Native Americans and hybridized religious ideas from indigenous religions, Shinto, Buddhism, Christianity, Confucianism, and contemporary spirituality; silence thus epitomizes the complexity of American religion and ethnic minorities’ contribution to it. Each chapter details the history of one art, a few key artists, an important historical moment, and one kind of non-binary silence in order to illustrate how silence in art utilizes religious ideas to mitigate a significant source of oppression. What emerges is a picture of Japanese Americans negotiating marginalization by race, gender, sexuality, and economics in society and within art worlds, and making imperfect choices. Yet, it is the flaws that make non-binary silence rich, turning silence into a window of the struggles, hopes, and spirituality or ordinary people in extraordinary times. Silence thus facilitates the multiplicity and internal contradiction of Japanese Americans.

Dr. Esaki is an interdisciplinary scholar of the religions and arts of American ethnic minorities. He researches the intersection of race, sexuality, and politics as well as the interaction and hybridization of religion among Asian Americans, African Americans, Native Americans, and White Americans.

Other research by Dr. Esaki includes:

This entry was posted in Books, Faculty Publications and Research, Religious Studies. Bookmark the permalink.