New Faculty Publication: The Near West: Medieval North Africa, Latin Europe and the Mediterranean in the Second Axial Age 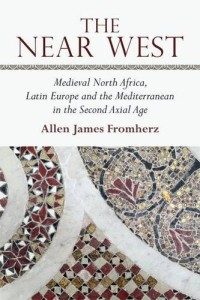 Viewing the history of North Africa and Europe through the eyes of Christian kings and Muslim merchants, emirs and popes, Sufis, friars and rabbis, this book argues that they together experienced the twelfth-century renaissance and the commercial revolution. In the midst of this common commercial growth, North Africa and Europe also shared in a burst of spirituality and mysticism, instigating a Second Axial Age in the history of religion.

Challenging the idea of a Mediterranean split between Islam and Christianity, the book shows how the Maghrib (North Africa) was not a Muslim, Arab monolith or an extension of the exotic Orient. Rather, medieval North Africa was as diverse and complex as Latin Europe. Instead of dismissing North Africa as a sideshow of European history, it should be seen as an integral part of the story. (from publisher’s information).

Prof. Fromherz is also the director of GSU”s Middle East Studies Center, and his research focuses on the Mediterranean and the Gulf. His other publications include these books:

and these articles as well: