“Bias is Bad for Business: Carl Owens, Gay Rights, and the Fight Against Cracker Barrel”, by William Greer 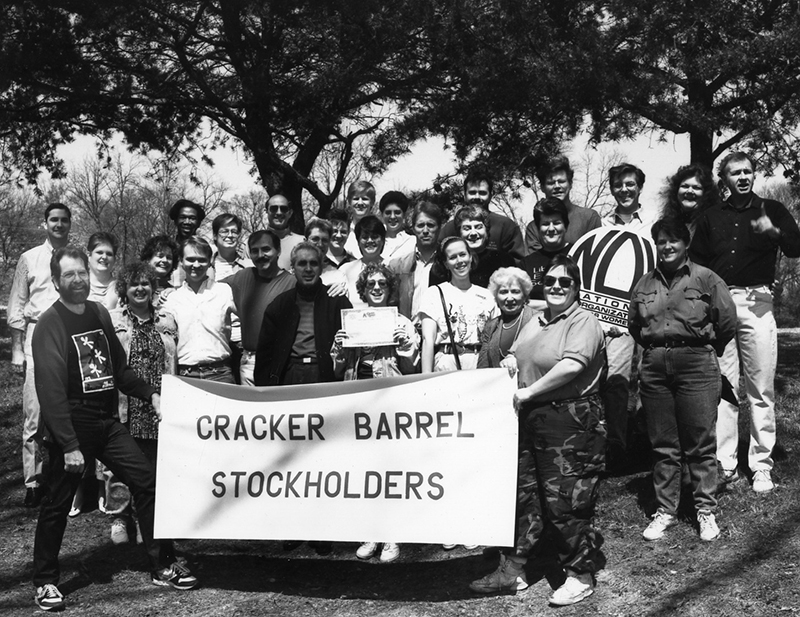 In January of 1991, Carl Owens, an activist with Queer Nation Atlanta, published an editorial in a gay newspaper called The Southern Voice. Owens was protesting a policy adopted by Cracker Barrel Restaurants, which stated that they would not hire or employ anyone “whose sexual preferences fail to demonstrate normal heterosexual values.” “It is time,” Owens wrote, “for individual lesbians and gays across the United States to help in the action to stop employment discrimination based on sexual orientation.” With this letter, Owens started an eleven-year fight for equality against a giant corporation. He was one of many activists in this struggle, and Georgia State University’s Archives for Research on Women and Gender has preserved his record of this little-known, albeit extraordinary, chapter of American History.

Gay rights activists staged protests and sit ins at Cracker Barrel locations across the southeast, but Owens had another plan: The Buy One Campaign. If enough people bought a single share, and then pressured Cracker Barrel to adopt a policy that protected gay employees from discrimination, it would be a “vivid example of our presence and power.” Remarkably, at a time when no federal laws, and only two states, protected gays and lesbians from discrimination, the campaign gained real momentum. Owens’ fight also attracted allies, some of whom came from surprising places, like churches. 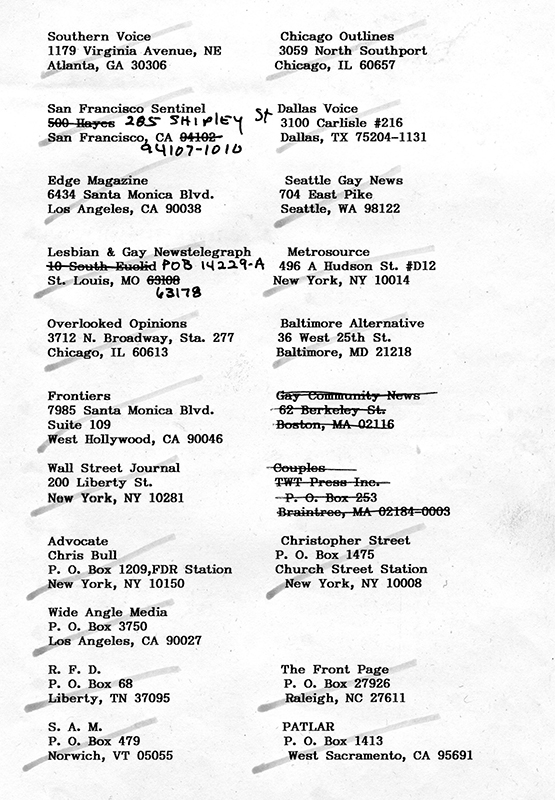 To promote the Buy One Campaign, Carl Owens wrote to ninety-one separate publications. Other, smaller newsletters and periodicals that were not on his list carried his message as well. Sometimes his message appeared in surprising places, such as a bulletin from the Unitarian Universalist Church of Chattanooga, Tennessee. The First Existentialist Congregation of Atlanta also printed Owens’ call in their January, 1992 newsletter, whose cover was graced with a photograph of Martin Luther King, Jr.

Eventually, The Buy One Campaign had a visible effect on Cracker Barrel and the makeup of its shareholders. In a report to the Lambda Legal Defense & Education Fund, Owens disclosed that Cracker Barrel had 4,500 shareholders in 1991. By 1993, the number had risen to 11,500. “I believe that over 50% of the stockholders of CB own only one share each,” he boasted. “And they are either Lesbian, Gay, or a supporter of the community.”  Other shareholders made proposals that complemented the Buy One Campaign’s goals. In 1995 the Sisters of Mercy Consolidated Asset Management Program proposed that shareholders vote to instate a policy that linked executive compensation to “social corporate performance.” Two years later, they proposed that executive compensation depend on efforts to “recruit workers from the broadest possible talent pool, without regard to race, color, creed, gender, age, or sexual orientation.”

The Buy One Campaign’s strongest ally, however, was the New York City Employee Retirement System. For 1991 shareholder meeting, Cracker Barrel obtained a restraining order against a group of Queer Nation activists. Owens managed to get inside in the meeting anyway, and he confronted Dan Evins. Patrick Doherty, the NYCERS representative, joined Owens in the confrontation, telling Evins that “bias is bad business.”

When Cracker Barrel tried to induce the Securities & Exchange Commission to block Owens’ proposal, NYCERS sued the SEC. Initially, the SEC had sided with Cracker Barrel’s argument that shareholders could not propose measures that affected a company’s day-to-day operations, which included hiring practices. NYCERS’ suit held that SEC had a long-standing precedent of permitting shareholders to vote on equal employment policies. Two other groups, the United States Trust Co. and the Women’s Division of the Board of Global Ministries of the United Methodist Church, joined NYCERS in the suit. The SEC ruled that the matter was now beyond their jurisdiction. If Cracker Barrel wanted to push the issue further, they’d have to go to court.

Still, the Board continued to recommend that shareholders vote against Owens’ proposal for a non-discrimination policy. In one such memo, the Board complained that “Mr. Owens is more interested in gay and lesbian concerns as social issues than in any economic effect these concerns may have on your company, and that he is using the Company’s proxy as a forum to promote his ideas.” Even though they couldn’t legally stop Owens, their recommendations carried a lot of weight. Proposals for a non-discrimination policy, alternately submitted by Owens’ and NYCERS, failed to draw a majority vote at ten consecutive shareholder meetings. 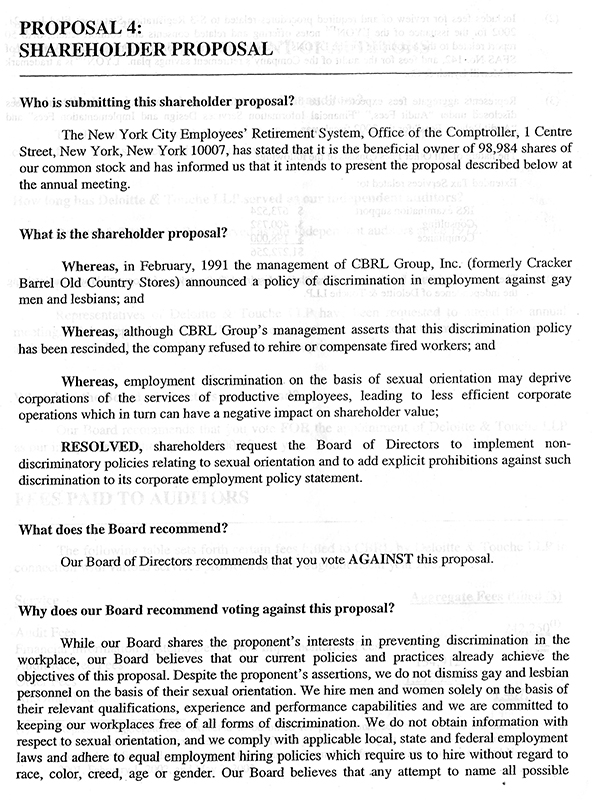 Owens kept pushing, and eventually the majority tilted in his favor. Finally, in 2002, the Board decided not to oppose Owens’ position. Instead, without a shareholder vote, they added new language to their hiring policy. A vote was deemed unnecessary because fifty eight percent of shareholders now favored the proposals. (Martin, Douglas, “Danny Evins”, New York Times, accessed December 8, 2016) Julie Davis, a company spokeswoman, described the change as “simple matter of listening to the shareholders.”

After eleven years, Carl Owens and his allies had won. He couldn’t have done it alone. The thousands of people who heeded his call to buy shares deserve credit, as does NYCERS, whose own holdings in Cracker Barrel gave the cause an enormous boost. Christian groups, like Sisters of Mercy and women of the Methodist Church deserve special recognition for advocating gay rights at the same time Pat Buchanan declared a “cultural war” to protect presumably shared religious values. (Patrick J. Buchanan, “1992 Republican National Convention Speech”, August 17, 1992, http://buchanan.org/blog/1992-republican-national-convention-speech-148, accessed December 8, 2016) Yet in the final analysis, there was no substitute for the persistence of Carl Owens’ and many other activists like him. The Buy One Campaign began, and ended, with his determination to right a wrong.

This posting was written by GSU Graduate Student William Greer.  Questions about the Carl Owens Collection on Cracker Barrel Records should be directed to Morna Gerrard, archivist, Women and Gender Collections, at 404-413-2880 or archives@gsu.edu.