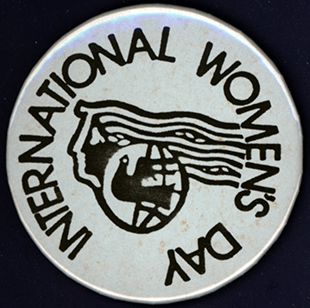 In the heart Women’s History Month, International Women’s Day is celebrated around the world on March 8. In recognition of this special day, we would like to highlight a collection with a strong international focus. Part of the Archives for Research on Women and Gender, the Nancy N. Boothe Papers include many items collected at the Fourth World Conference on Women, which took place in Beijing, China, in 1995. 189 governments and more than 5,000 representatives from 2,100 non-governmental organizations participated in the Beijing Conference. The principal themes were the advancement and empowerment of women in relation to women’s human rights, women and poverty, women and decision-making, the girl-child, violence against women and other areas of concern. The resulting documents of the Conference are The Beijing Declaration and Platform for Action. The U.N. Fourth World Conference on Women manifested a global women’s movement for change and has been called “the Woodstock of the women’s movement.” 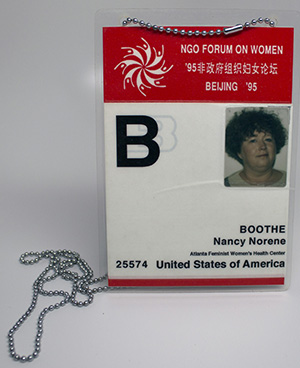 Nancy Boothe became the Executive Director of Atlanta’s Feminist Women’s Health Center in 1994, and in 1995, she attended the Beijing Conference on Women, where she taught a workshop, “GYN Self-Help.” In 2016, the Boothe Papers, along with the Committee on Women, Population and the Environment’s Depo Diaries Records were digitized with the support of a grant from the National Network of Libraries of Medicine (NNLM). The digital collection, which is completely word-searchable, is available on the Library’s website. Boothe has also been interviewed for the Activist Women Oral History Project, and a transcript of her oral history is available in the Special Collections Department Reading Room and upon request.