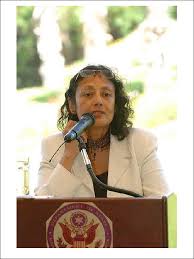 Though born in India, Mukherjee spent her adult life in North America and considered herself an American writer.  Her fiction highlights the experiences of immigrants in America and frequently features the transformations that immigrants go through as they navigate and assimilate into a new culture.  Mukherjee’s short story collection, The Middleman and Other Stories (1988) for example, features immigrant stories from the Caribbean, Middle East, and Asia and was the winner of the National Book Critics Circle Award for fiction.  Her best known novel, Jasmine (1989), is the story of a poor Punjabi young woman who makes her way to the United States and reinvents herself.

Mukherjee is the author of eight novels, four short story collections, three works of non-fiction, and a memoir (co-authored with her husband).   A selected list of her fiction includes:

Mukherjee is survived by her husband the writer, Clark Blaise, their son, Bernard, two grandchildren, and two sisters.