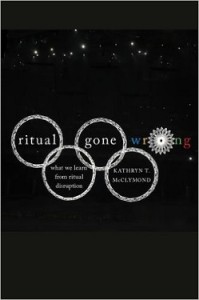 Congratulations to Dr. Kathryn McClymond, Professor and Chair of the Department of Religious Studies, on the publication of her new book Ritual Gone Wrong: What We Learn from Ritual Disruption (Oxford University Press).

The discipline of religious studies has historically tended to focus on discrete ritual mistakes occurring in the context of individual performances as outlined in ethnographic or sociological studies; scholars have largely overlooked the extensive discussions of ritual mistakes that exist in the religious literature of indigenous traditions. And yet ritual mistakes (ranging from the simple to the complex) happen all the time, and they continue to carry ritual “weight,” even when no one seriously doubts their impact on the efficacy of a ritual.

In Ritual Gone Wrong, Kathryn McClymond approaches ritual mistakes as an integral part of ritual life and argues that religious traditions can accommodate mistakes and are often prepared for them. McClymond shows that many traditions even incorporate the regular occurrence of errors into their ritual systems, developing a substantial literature on how rituals can be disrupted, how these disruptions can be addressed, and when disruptions have gone too far. Offering a series of case studies ranging from ancient India to modern day Iraq, and from medieval allegations of child sacrifice to contemporary Olympic ceremonies, McClymond explores the numerous ways in which ritual can go wrong, and demonstrates that the ritual is by nature fluid, supple, and dynamic-simultaneously adapting to socio-cultural conditions and, in some cases, shaping them.

Other recent publications by Dr. McClymond include: