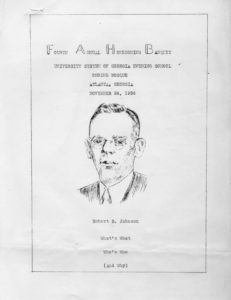 Determining when Homecoming began as a named “tradition” at Georgia State is not an easy task. Sources disagree, are unclear, and sometimes are mistaken.

The Technite student newspaper (a name reflecting our origin as Georgia Tech’s Evening School of Commerce) highlights a “Sixth Annual Dance” and banquet in its December 1926 issue. That could date the first annual banquet and dance to 1921. Annual banquets were also held by business clubs at Georgia Tech at least by 1917, and the Evening School junior class organized annual banquets for the seniors. The first Evening School class on the downtown campus graduated in 1916. So the origins of Homecoming, though not an event called “Homecoming,” seem to date back to 1916.

When Georgia State reached its half-century anniversary, a Faculty Fiftieth Anniversary Committee was formed. The 1964 Rampway yearbook shows committee members and provides a retrospective on college activities, describing the annual banquets as “held since 1916, but with more formality after 1928.” The “first Homecoming,” according to this source, “was held in the Georgia Baptist church dining hall” and alumni were invited. Aha—a concrete clue!

Working carefully through existing copies of the Technite and its successor, the Evening Signal, I was able to draft a chart with date and location of the annual banquet and dance.

November 24, 1936, at Shrine Mosque [Evening Signal of 2 November and 20 November 1936 refer to “Homecoming” and “Annual Home-coming Banquet and Dance”]

The most significant clue? The Evening Signal of 7 December 1936 refers to the November 24, 1936, event as the Evening School’s “fourth annual Homecoming.” Bingo! In retrospect, that would make the October 1934 banquet the first Homecoming (although it wasn’t called “Homecoming” in October 1934).

But was there any confirmation of this statement? In checking Merl Reed’s book, Educating the Urban New South: The Rise of Georgia State University, 1913-1969, as well as his working papers and footnotes, I noticed that he had relied almost exclusively on student publications to discuss student activities. But there was one intriguing exception: a reference to President George Sparks’s records, which we have in University Archives. Being curious I went to look, and found the flyer pictured above.

What a fascinating discovery! Robert Johnson, a man little known in current university annals, was a significant and beloved donor to the young school during the Great Depression. He was the chief fundraiser for the first building (completed in 1931) that became a permanent home for the burgeoning Evening School. The building was located at 126 Luckie Street NW, adjacent to the Baptist Tabernacle (venue for the event later known as the first homecoming). In 1936, Johnson personally paid off the remaining debt on the building. He was to be honored at the “Fourth Annual Homecoming” but was unable to attend due to illness. The next year, sixteen days after the “Fifth Annual Homecoming” in December 1937, he died at 53 years old.

Interested in more about the history of homecoming at Georgia State? See the article in the Fall 2017 issue of Georgia State University Magazine, or look for issues of the student newspaper, yearbooks, and photos available in the Library’s Digital Collections.