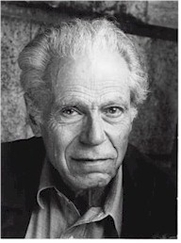 Albert O. Hirshman, an influential economist and author of several books on political economy, economic development and political ideology died yesterday at the age of 97.  Hirschman was born in Berlin in 1915.  He studied in at the Sorbonne, the London School of Economics and the University of Trieste, where he earned his Ph.D. in Economics in 1938. During the next couple of years he fought for the Spanish Republic in the Spanish  Civil War and he worked in France to help refugees escape the Nazis.  In 1940 a Rockefeller Fellowship brought him to Berkeley. After a stint in the United States Army in the mid 1940s, he began his career as an economist. He worked in Washington for the Federal Reserve Board  (1946-52) and later worked with Latin American countries on economic development issues.  Starting in 1956 a series of academic appointments in economics would bring him to Yale, Columbia, Harvard and Princeton.  In 2007 the  Social Science Research Council  established an annual prize in Hirschman’s name.

One of his most well known and influential books, Exit, Voice, and Loyalty, examines an individual’s options and responsibilities when he or she is a member of a failing organization. The University Library has this title and many other books written by Hirschman. Here is a short list of some of his notable works:

This entry was posted in Economics, Uncategorized. Bookmark the permalink.